Professor Muhammad Yunus - Women at the centre of our economic activity

Professor Muhammad Yunus - Women at the centre of our economic activity 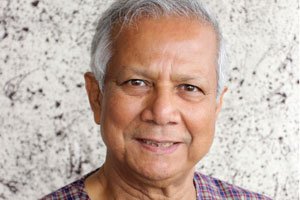 In the last 60 years or so, we have seen capitalism reach its peak. We have seen the socialist economies fall away and move rapidly towards capitalism. This has undoubtedly brought unprecedented wealth and prosperity in many parts of the world and to many people. At the same time, millions if not billions, have been left behind.

We have seen the deep financial crises grip world economy since 2008 and we have seen huge numbers of people becoming unemployed even in the so-called prosperous countries of the West. These crises and the resulting social problems starkly show-up the failings of the global capitalist system. I believe these crises give us an opportunity to design things for the better.

Grameen Bank, which is the first social business that we embarked upon in 1976, today serves more than 8.4 million borrowers, 94 per cent of whom are women, and is the only rural bank that is owned entirely by its borrowers. It proved for the first time that the poor, and especially the women among them, were not only bankable but usually more bankable than the rich. More than 200 million people, mostly women, now have access to microcredit around the world, and studies show they have brought a host of positive impacts to their families and their communities.

It is almost 40 years now since we began. We kept looking at the children of our borrowers to see what has been the impact of our work on their lives. The women who are our borrowers always gave topmost priority to the children. One of the “Sixteen Decisions” developed and followed by Grameen Bank borrowers was to send children to school. Grameen Bank encouraged them, and before long all the children were going to school. Many of these children made it to the top of their class. We began providing scholarships to meritorious students and education loans to those who attained higher education. These strides took place because the borrowers of the bank were women.

When I look back, I would say that the silent revolution that we created through microcredit and social business in Bangladesh has been due in large part to the central role played by women in all these activities. This is attested by the fact that the impact of microcredit has resulted not only in increase in household income and household savings, but  has also increased women's empowerment, reduced maternal mortality, reduced child mortality, brought down family size, and ensured that millions of children have gone to school, creating a new generation very unlike the previous one. The experience of Grameen Bank and the social business is a microcosm of what can happen globally if we put women at the centre of our economic and social activity.

The 20th anniversary of the ground-breaking 1995 Beijing Women's Conference, is the appropriate time for us to reaffirm our commitment to continue to empower women, both economically and socially, not only for their sake but for the sake of the future well-being of our children and their children after that.