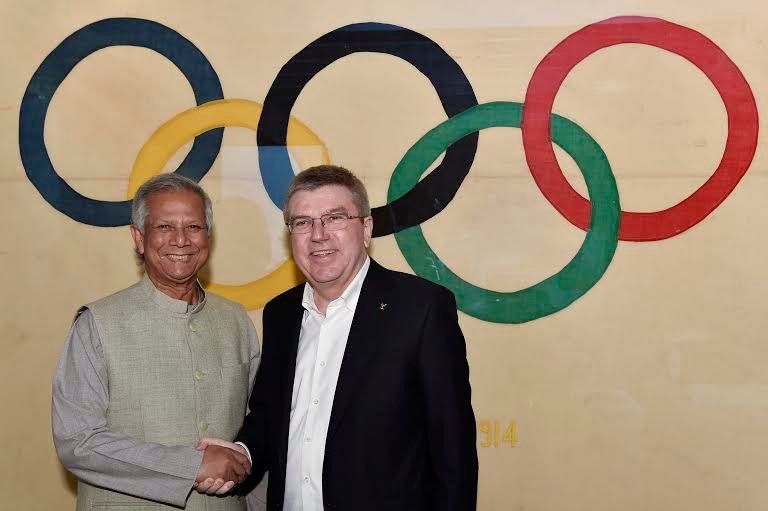 Nobel Laureate Professor Muhamamd Yunus and President Thomas Bach of IOC shake hands in front of the historical Olympic flag designed and created in 1914 by father of modern Olympics Baron Pierre de Coubertin of France. The five colors of the rings represent the colors most commonly used  in nearly all the flags of the world. Photo: IOC/Christoph Muratal

On arrival Professor Yunus was greeted by President Bach who gave him a two hour personal tour of the Olympic Museum. President Bach himself explained the history and significance each item on display. President Bach took over in September 2015, and is the first ever President who is also a Olympic Gold Medalist. Mr Bach won the gold medal in fencing in 1976. The Museum contains highly interactive and informative exhibits.  This highly impressive Olympic World Exhibition informs visitors of the history of the ancient Olympic Games and the rebirth of the modern Games in the 19th century. Highlights include a display of various Olympic torches, as well as video documenting major moments in the history of opening ceremonies.  Olympic medals are also on display.

The International Olympic Committee has an annual revenue of $8 billion of which they spend 90% to organize the Olympic movement to support the staging of Olympic Games and promote development of sports throughout the world. Cities around the world compete to host the Games. Contesting cities have to complete a questionnaire and meet certain pre-set criteria explaining what they want the games to create as a legacy.

In his previous meeting last year President Bach had liked the idea of social business promoted by Professor Yunus, and had invited him to visit IOC headquarters in Lausanne to explain the concept to his colleagues. During this visit professor Yunus elaborated his proposal to give social orientation to the Olympic Games beyond the games themselves. He proposed that in the selection process of the host city the questionnaire include city's initiative in creating social businesses addressing social problems of the city.

President Bach and his wife invited Professor Yunus to a private dinner and discussed invited him to elaborate his ideas of future programmes of IOC including host city selection procedure, redesign of Youth Olympics, and having a mini version of the Olympic Museum in each country so that the history and spirit of the Olympics can reach more people, particularly the youth. The headquarters of the IOC will soon be replaced by a new building constructed at the same site. Construction of the new building will start from next month and completed by early 2018. It will have the highest standard of environmental sustainability in all of Europe.

Under the instruction of President Bach a team is formed to initiate the process of implementation of the ideas presented by Professor Yunus. Meetings of the officials from both sides will start immediately to work out the details. Lamiya Morshed, Executive Director Yunus Centre accompanied Professor Yunus during this visit.